The Latitude Festival website said no alcohol, drugs, spray cans, umbrellas, reflective jackets or "cameras with detachable telephoto lenses", so that was a weight of my shoulder - pocket-sized cameras only. I shoved my little Canon into my oversized pocket knowing I could rely on it to get some half decent photos and took off from the camper to see what I could cram into the first day, otherwise known as...

Bone dry. But I knew from previous Latitude visitors that the well used thoroughfare known as Hollow Tree Way could turn into a quagmire given the wrong weather and the forecast was unpredictable. Other than THERE WILL BE THUNDERSTORMS...

I will stop here to register here how much I hate Friends. Not my friends of course, but there was no way I was going to be persuaded by them to get involved in this sickly commercial enterprise. Sorry, I'd rather fall flat on my face in the mud. Which I did the next day.

I was never a follower of The Beautiful South but The Housemartins hit the spot. So I did not mind that they did not play Perfect 10, which apparently upset some 'fans', but a finish with the a capella Caravan of Love was a perfect one.

So there you have a photo of one of the personal highlights for me. Temples were excellent - they looked cooly androgynous, played cool melodic Byrds type harmonies with a certain psychedelic edge.  They were introduced as "your new favourite band"  and were certainly my favourite of the new bands I heard. Which is a different thing.

Seriously, Anna Calvi is even cooler than Temples. When she does her Hendrix guitar asides, it's spellbinding, and her voice is so strong. I need to see her again.

Kate is a fellow Welsh person but unlike me has a really thick accent. The sound on the Lake Stage was unfortunately not doing her justice. Well worth checking out.

At this point I am having to pinch myself because I am still on Day One - Friday...

The Obelisk Arena is Latitude's Pyramid Stage. What is annoying about it is that it slopes uphill to the stage. This design defect blights other venues at Latitude such as the Comedy Stage and the Film and Music Stage.

Editors were probably the most easily identifiable festival band playing. I know their music well, perhaps it's this Obelisk stage, I'd certainly prefer to see them at a more intimate venue.


Shirley, my other half, had no desire to see Lily Allen (I was vaguely interested but was put off by the crowds and mega-venue) so we finished the Friday by taking in some 'minor' acts before calling it a relatively early night before the main crowd departed. We expected to be woken by noisy neighbours or simply by passing revellers because we were parked a few yards from the entrance to the campervan field. But we fell asleep quickly ready for whatever Saturday brought. Which was a thunderstorm at 4am...

So what did I say about falling face first in the mud? Well, the overnight thunderstorms did not make it that muddy, in fact where I fell face first it was onto my Ricoh camera lens which broke my fall. I am at least glad it was not the rather more expensive Canon. I had chosen to carry a lighter option for Day 2 and the extending barrel was bent out of position. I had written the camera off in my head but fiddled and forced and turned it on and off several times before everything straightened itself out for my first photos of mud...

It was a slow start to Saturday. Having to queue one hour to see Jack Dee was a surprise and, while the show was enjoyable, I wondered how much more had been fitted into the equivalent two hours on Saturday. One thing I now regret missing was the Agnes Obel set on the Radio 6 stage; live and learn - there was lots to enjoy besides what we were queueing for.

Shirley did not hang around for The Bohicas but had taken off to see Vivienne Westwood. I joined her for what was 40 minutes well spent before I left to catch the end of the James set on the Obelisk Stage. But all I was greeted by was a notice declaring that James' flight had been delayed and the show would now take place on the smaller Radio 6 stage at noon on Sunday. I had last seen James more than 20 years earlier at the Brixton Academy so the smaller stage was something to be looking forward to. Somehow you know that is going to go wrong too, don't you? 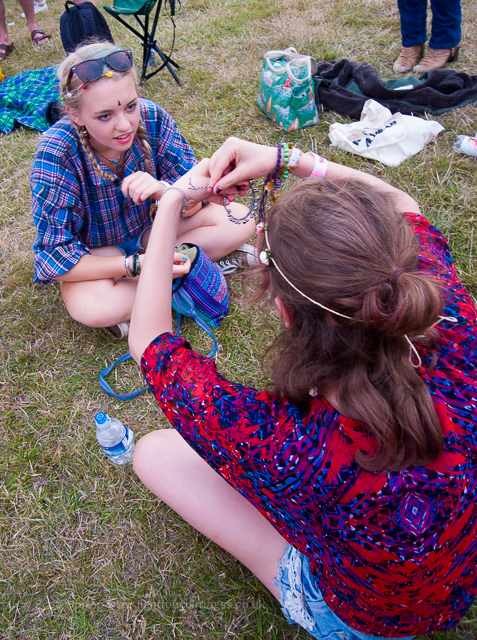 Somewhere two hours went missing between 6 and 8pm when Bombay Bicycle Club hit the stage. I think it was mainly spent under a tree munching a Pieminster pie to tunes from First Aid Kit and there are no photos to show otherwise. After a pleasant enough set from BBC, at 9.30pm...

Those capital letters are in place of any photos - from my teeniest camera with its bent lens they would be crap in the dark anyway. But Damon Albarn did provide what was for me by far the best show on the Obelisk Stage. And that was even before he stopped playing songs from his new Everyday Robots album and moved on to the Blur / Gorillaz encores.

The half hour of encores would have been memorable on their own but what set them apart was the natural light show. Lightning. Torrential rain. We could not hear the thunder but it was there. What a fantastic atmosphere - well over half the crowd were letting rip wearing the t-shirts they started the day with, nothing to protect them from what was an energetic 30 degree wash cycle.

I was dressed sensibly (of course) but my top half was soaked through. For two of the encores Damon was backed by his local London Gospel choir, there was Blur's 'Tender' and what I think was my personal single song highlight of the festival, a suped up version of "Mr Tembo" from the new Everyday Robots album coming over to the soaking crowd who joined in the choruses like a Blur song from way back.

So, onto Sunday. No photos from Hollow Tree Way this time, but it was a lot muddier than Saturday and it could have been much worse. The rain had probably stopped at about 1am and in the heat most untrodden ground had by 11am dried out.

Today we were going to meet our friends Jim and Sara who lived locally and came in on a day ticket. We arranged to meet at the comedy stage for Marcus Brigstocke hosting Andrew Maxwell and another guy, who was not credited by Latitude and MB and AM both forgot to mention on twitter, "putting the world to rights". I really enjoyed this but it went on longer than expected and dug into my intention to see James (the band). So I heard some James eating lunch outside before going into the tent to catch the interesting Tennessee twang of Valerie June.

I did that on my own and we met up again at the Obelisk Arena for The Jayhawks whose music we all found a bit ununspiring.

So there go a couple of personal photos. This was minutes after my refusal to sit on the 'Friends' sofa and succumb to the moral blackmail of the sales pitch "If you do not sit here you are not really friends are you?" And just to repeat, I hate that show!

We were at the Obelisk stage again to catch the tail end of Chrissie Hynde having just caught a one woman play in the Theatre Tent, "Soho Playhouse Inc, from NYC brings Jamaica Farewell to the Latitude Festival". Nice to have a sit down, not least because when we emerged it had obviously been raining outside.

6.30pm. That was better. James dragged us to hear Neil Cowley's "Jazz for Radiohead fans". Early Radiohead that is, for this was driving powerful rhythmic stuff. We might well catch them in Brighton in October. The only downer on that is that they are playing The Dome, a huge venue for 'jazz'. Well they look like a jazz band, even if at times they do not sound like one!

7.00pm James and I dashed across to the iArena for Future Islands before dashing back to the Radio 6 stage for The War on Drugs.

In case you cannot tell, we were late for the start of both gigs because of clashes and were well towards the back. So no intimate band photos here! I liked the immediate sound of Future Islands, who played in front of a great crowd, more than Jim did. He approved of The War on Drugs, as did I. The band anyway.

To the sound of Tame Impala (like!) from the Obelisk Stage we munched through another Pieminster. Long story on this Pieminster habit which I will not go into.

The decision was left on how to finish up the evening and after witnessing the dumbed down Black Keys t-shirt I knew that we were only going to be catching the first few Black Keys songs.

That's much better - close up to Julia Holter at a now stupidly sparsely populated iArena. I was with Jim and Sara - I bade them farewell and dashed back to the Radio 6 arena to find Shirley who was watching Lykke Li.