I had intended to do an all-encompassing photo essay on the audiences, people on the streets, as well as the bands at this "Europe's Leading Festival for New Music". But having decided on working light in terms of the gear I was carrying, I realised that I would have to concentrate on one thing, and I chose the bands. So here is a chronological account of my Great Escape, or at least the first two days because Saturday is dealt with in my next post.

I've restricted myself to one photo from each stage - but if things went a little off stage there may be another! Some of these gigs I saw the whole way through. Some I was there for less than one song simply because of the way the timing worked. The quality of the image is usually proportional to the amount of time at the gig!

To begin at the beginning, noon on Thursday and I was in one of the three venues where the first chords would sound out, upstairs at The Prince Albert.

I very quickly learned that even though I was walking very quickly between venues, I was not fast enough, arriving at The Hope and Ruin just in time to hear the last 10 seconds of Joe Dolman's performance. Like The Prince Albert, the place was packed, even so early. I was too late to have time to pull my camera out of my bag so no photo - and Joe Dolman will now probably be the Next Big Thing...

So it was a 100 yard sprint to The Brighthelm Centre to hear a few songs from four young guys that form a band called Model Aeroplanes. The bass player gave me a great smile at one stage which I think was for the camera rather than in amusement at the grey haired guy standing at the front....

The pace did not let up at these early stages for after a few songs I was off to the nearby Komedia for Flyying Colours, an Australian band playing before another packed audience.

Again I left before the end of the set. In none of these cases was it because I was not enjoying the music but more because I had been earmarking too many bands in this opening two and a half hours! I flew down to the Queens Hotel on the seafront for The Indien, a band from The Hague, Netherlands.

Realising that four or five songs was not enough to really get to know a band, and that I was going to be knackered before tea time on the first day if I did not take a break, I went to grab a potsu before zipping up to the Green Door Store for my first Canadian band, Arkells, from Ontario. 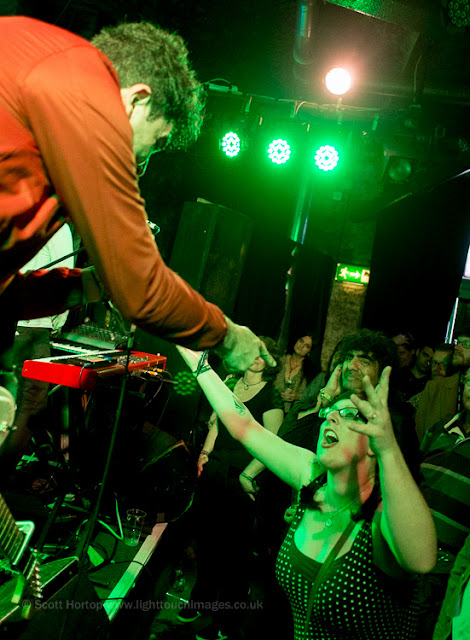 That is an off stage shot and I really like it, so that's why you get two from this gig. I am sure she was Canadian too!

Now it was back to The Komedia, this time the Studio venue. But things were getting really busy: 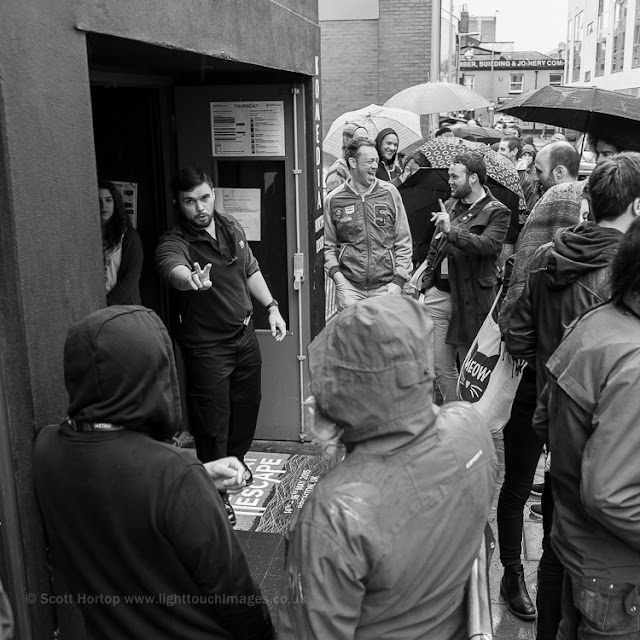 Ten minutes in the rain and only two admitted, but at least I was next. Unfortunately the place was rammed and I only had time to enjoy two songs remaining from Kadebostany who look as if the one day may be representing Switzerland on Eurovision. But their music is better than that.  I managed to get this shot from the back.

That was it for the afternoon. There was a natural break in proceedings which gave me time to get home for a break before returning for the evening gigs at the capacious Corn Exchange. Here I had the company of my wife who wanted to see Kate Tempest so she had a separate ticket for that gig. I unfortunately had to buy the same full price ticket - I was a bit peeved that I was not able to get a 'top-up' to my wristband because this was a Great Escape event. Sadly the 'top ups' were sold out before the tickets available to the general public - I am not sure that is the way it should be.

That was it for Thursday. After the intensity of Kate Tempest I was too knackered for anything else!

Friday was my wife's birthday. Her interest in The Great Escape did not extend to taking time of work (she couldn't anyway) so I was out on my own. But at least it was not raining, and again I started at The Prince Albert.
If you have not already noticed, there are a huge number of bands from around the world coming to The Great Escape to perform - the second day was carrying on in the same vein. Skipping out from the Prince Albert a whole 50 yards I was in the Green Door Store for more Canadiana.

Being from Wales, I thought it only right to catch some Welsh talent, so after Gabrielle Papillon finished I took off to the seafront, to The Hub, a venue that was new to me. I decided to put my faith in the Great Escape app on my phone to find the venue which was a mistake. I spent 10 minutes walking as directed in the wrong direction along the seafront into Hove before giving up and getting out the paper map in the handbook to walk 15 minutes in the opposite direction, eventually finding the venue seconds before the end of the gig. But at least I got some sort of photo as a souvenir.

Another new venue to me, The Paganini Ballroom was easier to find despite the handbook map placing it in the wrong street. There I enjoyed Blaue Blume, a band from Denmark, and a little of Groenland, another Canadian band, this time from Montreal.


I liked the Paganini Ballroom. There was a bit of space and plush carpets (ballroom?) which were nice to sit on to recover between sets. Unfortunately the lighting was not as good as at other venues - that's my excuse for less than brilliant images and I'm sticking to it!

I left after a couple of numbers by Groenland because I wanted to catch The Zombies. Yes, The Zombies - Rod Argent and Colin Blunstone, at a tiny pub venue, the Black Lion. These gigs were part of The Alternative Escape and unlike The Great Escape gigs which ran like clockwork, this was running behind. When I arrived, on stage were Millions who are a band who had come all the way from Brisbane, Australia. The room was crammed but between sets I was able to wriggle my way to the front for Rod and Colin.

I have to mention (showing my age) that the first LP I ever bought was Colin Blunstone's solo album Ennismore, so this set was pretty emotional, the 10 songs including Say You Don''t Mind, Time of The Season, I don't Believe in Miracles and of course She's Not There.

That was it for the Friday. I did not have any must-see bands lined up for the evening and it was my wife's birthday...

Like that Friday I am knackered, so I will write about Saturday separately!